Few German wine lovers or even wine growers under the age of 45 are likely to know much about the family-run estate once officially know as Carl August Immich-Batterieberg, even though it farmed one of the traditionally highest-taxed and highest-rated concentrations of vineyards on the Mosel; boasted a history not to mention labels as colorful as any in Germany; and was guided in its final generation by a soft-spoken gentleman who rendered some of the finest exemplars of – and offered some of the most profound insights into – Riesling of any I have been privileged to imbibe.

To go by the recent, lavishly-produced, multi-authored Weinatlas Deutschland, the stretch of vineyards once managed by Immich is scarcely worth mentioning. At one place along this sheer, once-celebrated expanse of blue and red slates the Prussian demolitions expert for whom the estate was named blasted apart what became known – if at first mockingly – as the „Batterieberg.‘

The circumstances surrounding Georg Immich’s 1989 sale of his family’s estate and its subsequent fate make for a tale of personal betrayal, divorce, decline, and criminal deceit too intricate and sensitive – perhaps too sorrowful – and certainly too long for retelling on the present occasion. And besides, the welcome news last year that oenologist Gernot Kollmann and two friends had purchased the by then prostrate estate has now been followed by an astonishingly successful inaugural range of 2009s under the newly-simplified estate name „Immich-Batterieberg,‘ and if you-re entirely ignorant of history or local terroir (as, apparently, are even some self-styled experts) these new wines will tell you everything essential.

Kollmann (who will continue to closely advise the Knebel estate in Winningen) would love to have vinified his new wines in fuder, but the few that remained in his cavernous facilities were unusable, and the approach he took out of expediency – tanks supplemented by seasoned barriques – succeeded far beyond my skeptical imagination. Halbtrocken and trocken Rieslings from Georg Immich’s cellar often remained fresh as well as riveting for 20 or more years, but I have remained very conservative in my projections for this latest collection, since there is no track record under the current regimen.

The estate’s acreage in Enkircher Zeppwingert has been replanted, and following some re-acquisitions this year, total holdings under the new owners correspond closely to those formerly associated with the Immich estate, minus the portion of Ellergrub that is farmed by Weiser-Kunstler under an arrangement with Georg Immich’s widow, and has been described in my recent reports on that young estate. (Incidentally, Terry Theise imported Georg Immich’s Rieslings during his latter years as proprietor.)

The -new Immich- 2009 Enkircher Batterieberg Riesling – half of which was brought-up in older barrique – saturates the senses with Bartlett pear, fresh lime, and tartly-edged Maine blueberry wreathed in heliotrope and honeysuckle. Silken-textured and suggestively creamy; caressing, yet lively; palpably extract-rich yet practically delicate (at 12% alcohol) this veritably wafts into its long, luscious, minerally shimmering finish. Plan on following bottles for at least a decade but don’t be surprised it the wine proves a good deal more resilient than that.

Picked over several of the ten principle days of harvest here October 20-29, the Immich-Batterieberg 2009 Enkircher Batterieberg Riesling Auslese exudes lemon, pear, and quince in fresh and preserved forms, offering a striking counterpoint of creaminess of texture and honeyed gloss with citric brightness. Even at 9.5% alcohol, 100 grams of residual sugar were left behind (no, former proprietor Georg Immich would not recognize this, not even as a Beerenauslese!) an amazing balance is achieved, along with considerable sense of invigoration. -That energy and clarity are what led me to bottle this as Auslese,- rather than B.A. explains Gernot Kollmann. Impingement of pear skin and crystallized ginger as well as hints of wet stone all add to the fascination of this buoyant wine as it soars to a saliva-inducing, spirit-lifting finish. I expect it will be worth following for at least 30 years. What a return the Batterieberg has staged in its new incarnation!

From the site with Immich-Batterieberg’s highest proportion of old, ungrafted vines, their 2009 Enkircher Ellergrub Riesling offers even more exuberant, almost explosive generosity of citrus – here grapefruit, lemon, and pineapple – than were found in its generic counterpart; and the interactive dynamic of that fruit with crystalline, saline and stony minerality displays scintillating energy. All the while, suggestions of pit fruits, fruit pits, iodine, peat, and deep nuttiness well-up in mysterious waves, the whole coming together in a finish of vibratory, mouth-watering persistence. I imagine the shade of Georg Immich smiling at this superb accomplishment, which happens to feature the halbtrocken balance and 12% alcohol he generally favored and believed (dare I hope, yet prophetically?) would find widespread future favor. But I’m sure he would be as astonished as I was to learn that 20% of this wine was raised in tank, and the rest in seasoned barriques. Look for at least a dozen years of excitement from bottles of this beauty.

The Immich-Batterieberg 2009 Enkircher Steffensberg Riesling – which finished deep into trocken territory – is also the sole bottling in the current collection to evince a distinct note of oak from its barrique component, yet I was surprised to experience this as complimented the particular pungency and piquancy of smoky crushed stone, mineral salts, herbs and spices that have traditionally characterized Immich wines from this red slate site and that stimulate the salivary glands no end. The fruit component of this substantial (at 12.5% alcohol) yet lithe Riesling is metaphorically cool and winter pear-like, a perfect foil for the mineral as well as piquant aspects (no doubt reinforced by the 10-12 hours of skin contact typical for this collection) that seem to positively shimmer in its protracted finish. I would anticipate at least 6-8 years of high-performance here.

2009 Immich-Batterieberg Riesling C A I

The 2009 Riesling Kabinett C. A. I. (employing the former winery’s initials) is as fine a generic Riesling of its vintage as I have tasted, so given that assessment as well as the fact that this excellent value represents a debut, I take the liberty to go into unusual detail. Typical for the entire range of the new estate is discrete, spontaneous fermentation (i.e. no cross-inoculation) of each component lot and a refusal to be distracted from quality considerations by worrying whether a wine will finish to legal Trockenheit (which this year’s -C.A.I.- didn’t – which, opines Kollmann, is likely to be the norm) nor to employ the terms -trocken,- -halbtrocken,- or -feinherb- on any labels. Why -Kabinett- (although that word is admittedly only on one of this wine’s two labels)? -I have to do something,- explains Kollmann, -to distinguish my introductory level wine even at first glance from the majority of Gutsrieslinge that even from top estates are being sold at a price to which I cannot, with my costs and small volume, afford to descend.- This cuvee incorporates the lower sections of Batterieberg, which were replanted with clonal selections in the 1990s, and even here there is around 10% wood by way of a barrique-aged component. Exuberant lime, tangerine, and pineapple soar from the glass and burst onto the palate with vivid fresh juiciness followed by a cascade of saline, crushed stone and somehow crystalline mineral matter, setting up an animated and animating interplay that turns out to be typical for the entire 2009 Batterieberg collection. Residual CO2 enhances the sense of invigoration, yet a subtle creaminess is evidenced throughout, engendering a textural counterpoint that mirrors the wine’s flavor dynamic. This will reel you in for the next sip before you can finish taking its finish’s measure, and it should be capable of behaving that way for at least the next 4-5 years.

A 2009 Riesling Escheburg – whose name comes from that of the great stone former fortress housing Immich-Batterieberg – represents largely ungrafted vines from steep but to some degree less-favored slopes. This is the only wine in its collection – save for the Batterieberg Auslese – to display significant sweetness, which however nicely supports pineapple, musk melon fresh lime, and ginger on a creamy yet refreshing palate, with distinct wet stone notes offering contrast in the finish. The sort of interactive dynamic that characterizes the other Immich 2009s is missing here, however, at least for now. The pleasure in this instance is of a more soothing sort, and I would plan on enjoying the wine over the next 3-5 years, although time might certainly tell a different story. 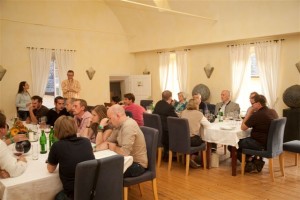 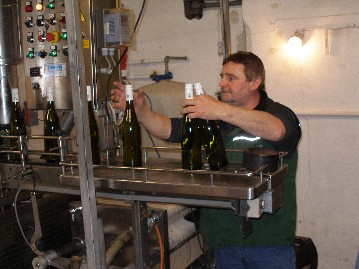 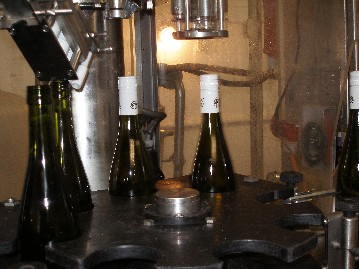 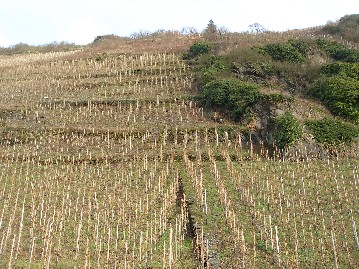